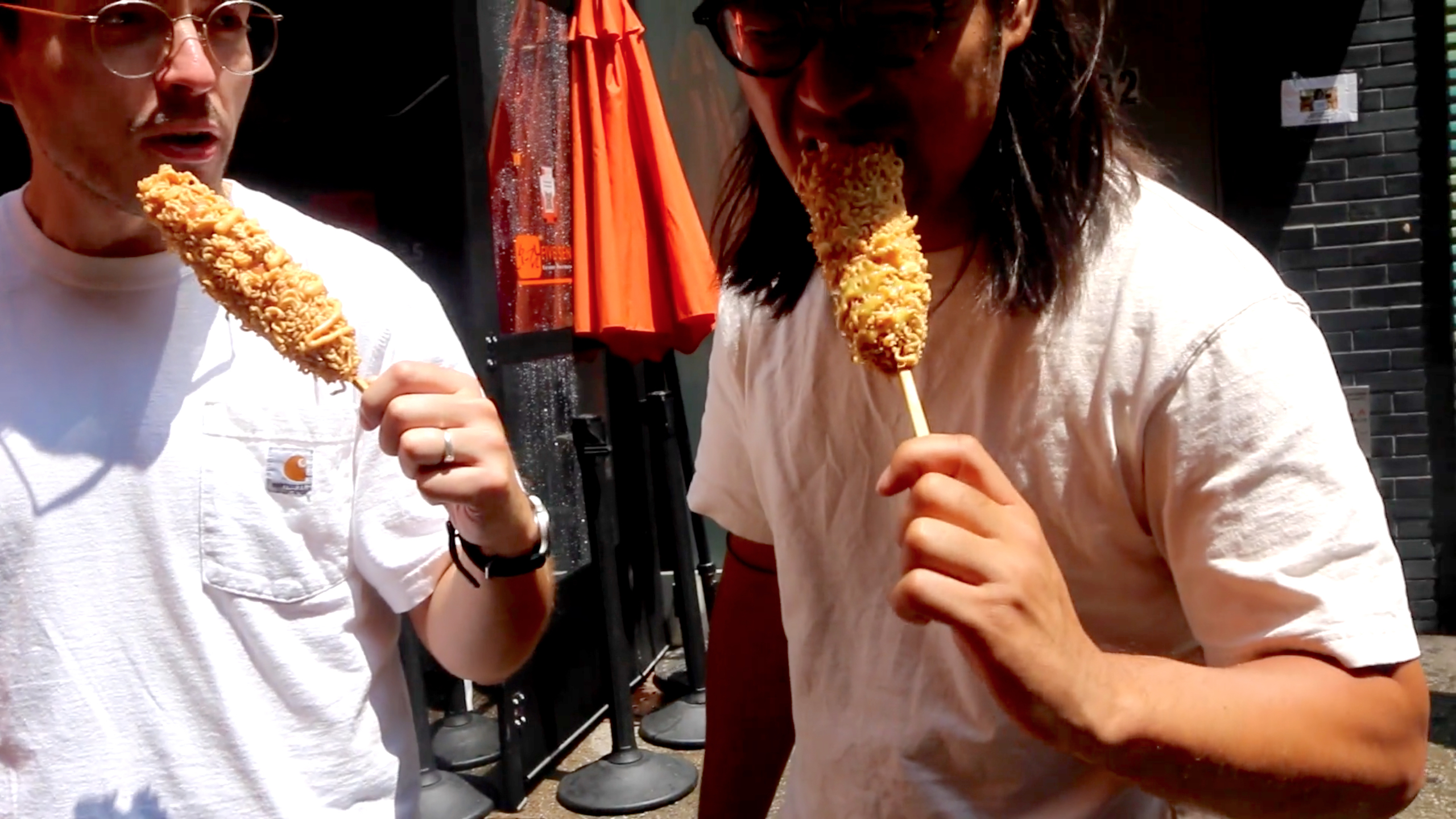 We will be the first to admit this video (if you can really call it that) is chaotically messy. It turns out, going to eat Korean deep-fried meat sticks in 100-degree weather was not the best idea. On top of it all, we started at 10:00 AM.... and none of us are really breakfast eaters. By early afternoon, the three of us couldn’t distinguish if we were sweating from the heat or the copious amount of calories we had just consumed. TUMS were taken, and lessons were learned. All we can say is, don’t be like us.

Because we were in complete heat stroke, we failed to actually film or describe the rankings of these magically tasty items. So here we are writing them out… enjoy!‍

Anticipating long lines, we arrived at Oh-K Dog right when it opened. If you watched the video, you saw there was absolutely no line, and Thi, ever-so kindly, made sure to remind me of that fact throughout the day.

Nevertheless, we were there and both excited to try our first Korean Rice Hotdog of the day. We placed an order for an Oh! K Classic Hot Dog and a Potato Hotdog (the same thing but with the addition of potato chunks on the exterior) – both would be finished with a roll in white sugar. After we received our caloric-dense goodies, we eagerly went over to the sauce station – there were so many to choose from, and naturally, we got cups of all of them.

Since this was the first place we went to, it was impossible to rank our selections due to the fact we had tried nothing else. To shortly sum it up: the crispiness was present, the sugar was pleasant, and the sauce selection was nothing short of a dream – the only thing we thought could be better was the hot dog itself. ‍

‍After scooping up our friend Colton, we headed over to Jongro Rice Hot Dog. Thi decided to stay with his illegally parked car so Colton and I headed upstairs to what we thought was Jongro (we should have known it was the wrong place after being greeted by a hostess). Turns out, there are two Jongros, and we were, of course, in the wrong one. Quite embarrassed, we sheepishly waved goodbye at the confused waitstaff and headed back downstairs.

When we finally arrived at the correct Jongro, we waited our turn in the sweltering sun to place our second order – two Ramyon Noodle Chip Hotdogs sans the sugar. This round, we chose to stick to one sauce per dog – Spicy Mayo for Colton and Honey Mustard for Thi and I's.

After taking our first bites, we quickly realized that Jongro was the master of Korean Rice Dogs. The ramen exterior was insanely crispy, the sauce drizzle was just right, and the hotdog itself was far superior in comparison to the one we had earlier that morning. So far, the Korean Rice Dog ranking stood at #1 Jongro Rice Hot Dog and #2 Oh-K Dog.‍

‍Feeling worse for wear, we drove to our last stop of the day, Two Hands Corn Dog. We wobbled our way over to the menu and decided we would only be able to finish a singular hotdog between the three of us – we all agreed on the Spicy Dog (Classic K-Dog with Spicy Sauce and Hot Cheetos Powder). Colton, for a reason none of us could fathom, also decided he wanted an addition of Dirty Fries (the same toppings as the Spicy Dog but on top of tots).

As we waited for our order, we longingly stared at the ice cream parlor next door, silently wishing that we had ordered icy, frozen treats rather than hot, spicy ones. When our hotdog and tots arrived, we all took small bites one right after another (we’re all vaccinated we promise). Similar to the last two places, the crispiness was great, the sauce was nice, and the hotdog’s flavor was good – the only complaint was that there was not enough Hot Cheetos dust!

We came to the conclusion that our ranking stood as follows: #1 Jongro Rice Hot Dog, #2 Two Hands Corn Dog, and #3 Oh-K Dog. The moral of the story is, each place we visited provided tasty creations that we’re sure anyone would enjoy. Thi, Colton, and I would all gladly go back to any of the three places – just not in the morning, definitely not in 100-degree weather, and most certainly not back-to-back in one day.